The Peanut Industry at a Glance

What is the origin and history of peanuts? 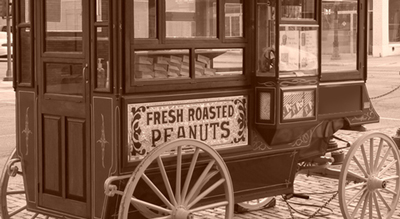 The peanut plant probably originated in Peru or Brazil in South America. No fossil records prove this, but people in South America made pottery in the shape of peanuts or decorated jars with peanuts as far back as 3,500 years ago.

European explorers first discovered peanuts in Brazil. As early as 1500 B.C., the Incans of Peru used peanuts as sacrificial offerings and entombed them with their mummies to aid in the spirit life. Tribes in central Brazil also ground peanuts with maize to make a drink.

Peanuts were grown as far north as Mexico when the Spanish began their exploration of the new world. The explorers took peanuts back to Spain, and from there traders and explorers spread them to Asia and Africa. Africans were the first people to introduce peanuts to North America beginning in the 1700s.

Records show that it wasn’t until the early 1800s that peanuts were grown as a commercial crop in the United States. They were first grown in Virginia and used mainly for oil, food and as a cocoa substitute. At this time, peanuts were regarded as a food for livestock and the poor and were considered difficult to grow and harvest.

Peanut production steadily grew the first half of the nineteenth century. Peanuts became prominent following the Civil War when Union soldiers found they liked them and took them home. Both armies subsisted on this food source high in protein.

Their popularity grew in the late 1800s when PT Barnum’s circus wagons traveled across the country and vendors called “hot roasted peanuts!” to the crowds. Soon street vendors began selling roasted peanuts from carts and peanuts also became popular at baseball games. While peanut production rose during this time, peanuts were still harvested by hand, leaving stems and trash in the peanuts.  Thus, poor quality and lack of uniformity kept down the demand for peanuts.

Around 1900, labor-saving equipment was invented for planting, cultivating, harvesting and picking peanuts from the plants, as well as for shelling and cleaning the kernels. With these significant mechanical aids, demand for peanuts grew rapidly, especially for oil, roasted and salted nuts, peanut butter and candy.

In the early 1900s peanuts became a significant agricultural crop when the boll weevil threatened the South’s cotton crop. Following the suggestions of noted scientist Dr. George Washington Carver (link to Carver page), peanuts served as an effective commercial crop and, for a time, rivaled the position of cotton in the South.

What about peanut butter?

Peanuts and peanut butter became an integral part of the Armed Forces rations in World Wars I and II. It is believed that the U.S. army popularized the peanut butter and jelly sandwich for sustenance during maneuvers in World War II.

Peanuts are the 12th most valuable cash crop grown in the United States with a farm value of over one billion U.S. dollars.

Unlike other countries, the prime market for U.S. peanuts is in edible consumption and the marketing and production focus is in that direction.

Peanuts, peanut butter and peanut candy are some of the most popular products in the United States.  Americans eat more than six pounds of peanut products each year, worth more than $2 billion at the retail level.

Peanut butter accounts for about half of the U.S. edible use of peanuts—accounting for $850 million in retail sales each year. It is a popular sandwich spread, for children and adults, because it is both nutritious and economical.

The other half of U.S. consumption is divided equally between snack nuts and confectionery. Peanuts are eaten as snack nuts in many ways: roasted in shell, roasted kernels or in mixed nuts. Snack nuts are often salted, spiced or flavored with a variety of coatings.

Many of the top-selling confectionery products in the U.S. contain peanut and peanut butter. They are most popular in combination with chocolate. Peanuts and peanut butter also are used in a variety of cookies and baked goods. Peanut oil is considered a premium, high quality cooking oil in the U.S., is able to withstand higher cooking temperature than many other oils and does not retain the flavor of foods cooked in it.

Seven states account for approximately 99% of all peanuts grown in the U.S. Georgia, Alabama, Florida and Mississippi grow the major proportion of all peanuts followed by Texas, North Carolina, Virginia, and Oklahoma.

The peanut growing regions of the U.S. have direct access to port facilities of the Atlantic Ocean and the Gulf of Mexico.

U.S. peanuts fall into four basic variety types: Runner, Virginia, Spanish and Valencia. Each of these peanut varieties are distinctive in size and flavor.

The runner variety has become the dominant peanut type grown in the U.S. since its introduction in the early 1970’s. Runners have rapidly gained wide acceptance because of their attractive kernel size range. The major proportion of runners are used for peanut butter. Runners, grown mainly in Georgia, Alabama, Florida, Mississippi, Texas and Oklahoma, account for 80% of total U.S. production.

Virginias have the largest kernels and account for most of the peanuts marketed as inshells or “ballpark peanuts.” When shelled, the larger kernels are sold as salted peanuts. Virginias are grown mainly in southeastern Virginia , parts of South Carolina, North Carolina and West Texas. Virginia-type peanuts account for about 15% of total U.S. production.

Spanish-type peanuts have smaller kernels covered with a reddish-brown skin. They are used predominantly in peanut candy, with significant quantities used for salted nuts and peanut butter. They have higher oil content than the other types of peanuts which is advantageous when crushing for oil. They are primarily grown in Oklahoma and Texas. Spanish-type peanuts account for 4% of U.S. production.

Valencias usually have three or more small kernels to a pod. They are very sweet peanuts and are usually roasted and sold in the shell; they are excellent for fresh use as boiled peanuts. Because of the greater demand for other varieties, Valencias account for less than 1% of U.S. production and are grown mainly in New Mexico.

Peanuts are the seeds of an annual legume, which grows close to the ground and produces its fruit below the soil surface. U.S. peanuts are planted after the last frost in April or May when soil temperatures reach 65–70° Fahrenheit (20° Celsius). Pre-planting tillage ensures a well-prepared seedbed. Seeds are planted one and half to two inches (four to five centimeters) deep, one every two to four inches (5–10 centimeters) in the Southeast and Southwest, and four to six inches (10–15 centimeters) in the Virginia-Carolina area, in rows about three feet (one meter) apart. The row spacing is determined to a large extent by the type of planting and harvesting equipment utilized.

After proper curing, farmers’ stock peanuts (harvested peanuts that have not been shelled, cleaned or crushed) are inspected and graded to establish the quality and value of the product. The inspection process determines the overall quality and on-farm value of the shelled product for commercial sales or price support loans.

The inspection and grading of peanuts by the Agricultural Marketing Service of the U.S. Department of Agriculture (USDA/AMS) occurs at buying stations or shelling plants usually located within a few miles of where the peanuts have been harvested. A pneumatic sampler withdraws a representative quantity of peanuts from the drying wagon, and from this sample the USDA inspector determines the meat content, size of pods (for Virginia &Valencia), damaged kernels, foreign material, and kernel moisture content. Once the grade is established, the loan or commercial value is determined from USDA price support schedules.

After grading, peanuts move on to the shelling process. In the first step of this process, peanuts are cleaned — stones, soil, bits of vines and other foreign materials are then removed. The cleaned peanuts move by conveyor to shelling machines where peanuts are de-hulled as they are forced through perforated grates. The peanuts then pass through updraft air columns that separate the kernels from the hulls. Specific gravity machines separate the kernels and the unshelled pods. The kernels are then passed over the various perforated grading screens where they are sorted by size into market grades.

The edible nuts are individually inspected with high-speed electronic color sorting equipment that eliminates discolored or defective kernels as well as any remaining foreign material.

In-shell peanuts are usually produced from large Virginia or Valencia type peanuts that have been grown in sandy and light-colored soil for bright hulls. Sizing screens remove the small pods while updraft air columns remove very immature and lightweight pods. The largest remaining pods are separated into size categories by screens. Stems are removed and any remaining immature pods are removed by specific gravity. Electronic sorters then remove dark, cracked, or damaged pods so that only the most mature, brightest pods remain.

Peanuts may be cultivated once or twice (depending on region) to control broadleaf weeds and grasses. A climate with 200 frost-free days (175 days for Spanish varieties) is required for a good crop. Warm weather conditions, adequate moisture, and fertile, sandy soil result in the appearance of peanut leaves in 10–14 days after planting. Farmers generally follow a three-year rotation pattern with cotton, corn or small grains planted on the same acreage in intervening years to reduce disease problems. In addition, many farmers utilize irrigation in an effort to reduce crop stress and thereby enhance opportunities for the production of high quality peanuts.

Integrated pest management is utilized in order to control weeds, diseases, and insects. Diseases caused primarily by several fungal organisms are particularly troublesome and generally require chemical control. Weeds are controlled using either chemical or mechanical methods or a combination of the two.

The peanut harvesting process occurs in two stages. Digging, which is the first stage, begins when about 70% of the pods have reached maturity. At optimum soil moisture, a digger proceeds along the rows of peanut plants driving a horizontal blade four to six inches (10–15 centimeters) under the soil. The digger loosens the plant and cuts the taproot. A shaker lifts the plant from the soil, gently shakes the soil from the peanut pods and inverts the plant. A windrow of inverted plants results and this exposes the pods to the sun. The peanuts are now ready for the second phase of the harvest — combining. After drying in the field for two or three days, a peanut combine (also known as a thresher) separates the pods from the vines, placing the peanut pods into a hopper on the top of the machine. The vines are returned to the field to improve soil fertility and organic matter. Freshly harvested peanut pods are then placed into drying wagons for further curing with forced hot air slowly circulating through the wagons. In the curing process, moisture content is reduced to 8–10% for safe storage.